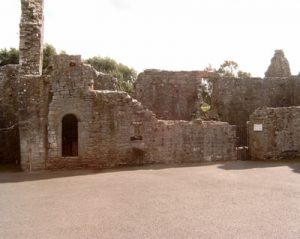 “That the Cross of Christ may not be emptied of its power” is the inscription on the renovated altar at Holycross Abbey. This inscription accurately describes the reason for making Holycross Abbey the inspiration it is for hundreds of years, and continues to be for thousands of pilgrims and visitors.
We hope that you will find this website both informative and inspirational.

Those who had the opportunity to visit this ancient site and have been touched by its spiritual, religious and historic heritage .

and finally, those who have never been here in person but want to know more about this wonderful abbey. 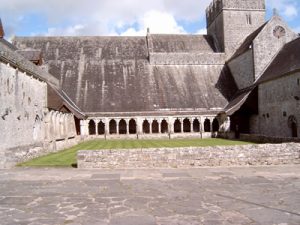 Tradition presents a picture of a visit by King Donal Mór O’Brien with a retinue of bishops and chieftains to his place, where there was already a monastery or hermitage following a Celtic rule of life. The Cistercian Rule, having spread throughout Europe with amazing rapidity had been introduced to Ireland some forty years previously by St. Malachy, Archbishop of Armagh, and now King Donal proposed to endow a Cistercian monastery with large tracts of land here by the Suir in the country of the O’Fogartys, his mother’s people.
The group of monks who founded (or ‘colonised’) this monastery came from Monasteranenagh (Mainister, near Croom, Co. Limerick). Monasteranenagh had been colonised from Mellifont and Mellifont from Clairveaux in France, whose abbot, St. Bernard, was a friend of St. Malachy. The first Cistercians, aiming at a hidden and silent life, drew up a simple Rule. The monasteries were to be in remote places and the monks were to be self-supporting through working the monastic lands themselves, hence a sizeable estate was needed. 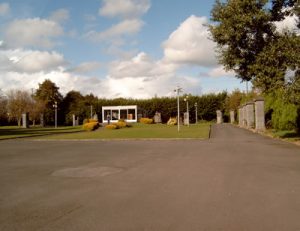 The Cistercian plan grouped the building in a square with the church on the North side, an East range including the sacristy, chapter house and parlour, the kitchen and refectory (dining hall) on the South side, and in the West Range, the cellars and foodstores. In the centre was the cloister garth, a grass-covered square with a roofed-in walk around it. On the first floor in the East Range was the dormitory for the choir monks while the dormitory of the lay brothers was similarly provided in the West range.
Life was austere and silent, devoted to prayer and work. Community prayer was distributed over seven periods each day, beginning at 2 am, and consisted of the chanting of the Divine Office (psalms and readings); there was also the Conventual (community) Mass. The abbey church was bare and plain, with whitewashed walls which reflected light coming mainly from the windows on the North side.

Building for a New Era

During its first two centuries of its existence the Abbey had its difficulties and at times its independence, and even survival, seemed in doubt. There was promise of a happier era when, in 1414, a new patron extended to the Abbot and monks of Holy Cross his special protection. This time the patron came from the Norman settlers. He was James Butler, fourth Earl of Ormonde, the most powerful nobleman in Ireland. During his long term as Earl (1505-1452) he held the offices of Lord Lieutenant or Justiciar at various periods. Significantly, it was at this time that an ambitious scheme of rebuilding portions of the Abbey commenced. The eastern arm of the church was rebuilt, that is, the chancel, the two trancepts, the monks’ choir and the massive tower. Of the earlier Cistercian church most of the nave was retained but new windows, including the great West window, were inserted into the old fabric. The East and West Ranges were largely reconstructed, apart from the lower parts of the walls. The cloister arcade was rebuilt, the Abbot’s house was added and the infirmary and guest house extensively remodelled.

Suppression of Monasteries Act
Hopes were blighted within a century of the great rebuilding. In England, King Henry VIII set in train an investigation of the monasteries of his realm  and having established that they were too wealthy and were either badly run or no longer served a useful purpose, he decreed that all religious houses worth less than £200 a year were to be suppressed and handed over to him. This was in 1536. The Dublin Parliament immediately rushed through an Act of Suppression. Soon thirteen Irish religious houses were gone, their property given to the Crown. They included five Cistercian houses. In 1539 Henry decreed the closing of the bigger monasteries.

The Irish Church Act, 1896, which disestablished the church of Ireland, empowered the commissioners of the Church of Ireland to transfer all important churches and ecclesiastical buildings into the care of the State, to be preserved as national monuments and not to be used as places of public worship. One hundred and thirty seven ancient buildings, including Holy Cross Abbey, were listed for transfer to the Commissioners of Public works. The technicalities of ownership of buildings and sites were not investigated at the time by any authority. The paramount consideration was the saving of the nation’s architectural heritage.

A New Dawn
In 1976 a new destiny opened up for Holy Cross. A move was initiated locally to restore the Abbey church and bring it back into use for the local community largely due to the foresight and vision of Fr. Willie Hayes (Curate of Holycross/Ballycahill. Through his determination and persuasive power others were duly convinced of the merits of such a considerable task. When Archbishop Morris was approached he became similarily enthusiastic and the project went from strength to dtrength. The move gathered support and the government was approached to remove the hindrance contained in the Irish Church Act in order to allow the National Monument to be used again as a place of worship.

The following year the government announced its intention of introducing the necessary legislation and on the 21st January 1969, at a commemorative meeting in the Mansion House, Dáil Éireann began the first stage of the Holy Cross Bill, 1969. The Bill entitled “An Act to enable the Commissioners of Public Works in Ireland to restore for ecclesiastical purposes Holy Cross Abbey in the County Tipperary” was passed, without opposition, by the Dáil. The Act of 1869 was amended to make this an exception. Archaeological exactions began in the Abbey shortly afterwards and restoration began in 1971. A celebration of the restoration was held in October 1975.

This guide follows a particular route for a visit to the Abbey; if you follow a different route you will need to locate the features.
The Processional door gives access to the South aisle of the church. To get an overall view of the plan of the church it is best to go right on entering and then immediately left under the great trancept arch. Stand facing the body of the church, your back for the time being to the altar. You are in the centre of the church, the ‘crossing,’ where nave (in front of you) and trancepts (South to left, North to right) meet. The church follows the cruciform pattern generally found in Cistercian houses. Overhead is a delightfully groined roof with stone ribs springing from points within the arches. The ribs fan out and meet above where you see holes for bell ropes. The vaulting here and over the trancepts and presbytery (at your back) combine to make a pleasing study. The four arches support the great Tower overhead, where the bells are placed.

All the stone work was done with chisel and mallet and the skilled masons carved their personal marks on the pillars. On the pillar to the North (right) an owl was carved.
Looking straight ahead you find first an area with a level floor (the choir), then a dividing wall broken by an arch and steps leading to the sloping floor of the nave which reaches back to the West gable containing the doorway (not quite central) and the West window. The slope is due to the bedroc underneath. The area West of the dividing arch was allocated to the lay-brothers, who did not have the obligation of taking part of the choral services. Lay people also occupied this part. For almost 200 years, when the Abbey was in ruin, the church was used as a burial ground, there are some old pictures in the display case.
Turning around, you face East towards the fine window through which the morning sun shines on the altar. On the South (right hand) wall is one of the special features of the Abbey, the Sedilia.

The Sedilia
“The most sumptuous of all Cistercian fittings, indeed the finest piece of church furnishing in medieval Ireland, are the sedilia in the chancel at Holy Cross” (Stalley: Cistercian Monasteries of Ireland). The structure provided seats for celebrant, deacon and subdeacon at Mass; sedilia (sedes, seat) are found in most monastic churches. The structure is 17 feet high, there is a richly carved base with leaf ornamentation and the structure is surmounted by a roof with a canopy. Slender pillars separate the seats; on one the figure of an angel has been badly displaced. An unusual feature of the sedilia, one which has given rise to much discussion among students of the abbey, is the set of five shields between the pointed arches. Reading from left, the first is a plain cross, possibly the coat of arms of the Abbey.

The second and largest, carries the royal arms of England in a form adopted after 1405.

The third shield carries the arms of the Ormonde Butlers, an acknowledgement of the patronage of the earls of the period and the arms of the fourth seem to be those of one of the Desmond Geraldines. The fifth shield is blank; like the first shield it is only cut into the face of the sedilia, not in bold relief like the other three; possibly those shields were not part of the original design. The sedilia has been popularly known as the “Tomb of the Good Woman’s Son.” A tradition still surviving claims that this is the burial place and monument of the English prince who was murdered locally.

Relic of the Cross

Nowadays the authenticated relic, acquired from St. Peter’s Basilica in Rome in 1977, is displayed for veneration in the North transept. Between the chapels in the South transept. on the way to the sacristy , is a structure which has given rise to much discussion. It is disappointing that so much uncertainty surrounds the original relic of the Holy Rood which brought fame to the Abbey.